(7-4-2022). Some new cycling shops have decided to add catering to their range of services, which they specify with a cafeteria. Retailers seek to boost their community of cycling customers, as well as open up to new ones from these spaces designed as meeting points.

Cafeterias are becoming one more service within the offer of some specialized cycling shops. The main objective is usually to create a community among the users of the establishment and to strengthen their relationship with it. However, these cafeterias are also open to all types of customers, beyond cycling fans.

The managers of the Pasión Ciclista, Ravet Bikes, Bimont and Volo Ebikes stores explain the results they are obtaining with this initiative.

Bimont has, on the island of Mallorca, a central store in Palma, a bicycle rental establishment in the town of Alcúdia and, since last year, a Coffee & Shop in the town of Santa Maria del Camí. According to the manager of Bimont Bicicletes Palma, Enrique Riera, in this last establishment, in addition to a cafeteria, they have material, accessories, textiles, nutritional supplements and a small workshop.

Enrique Riera points out that the motivation for opening a Coffee & Shop lies in “offering one more service to the cyclist, so that he feels at home having a coffee or lunch and, at the same time, has at his disposal some products that he may need. for the bike”.

The premises, of 140 square meters, are located in an area of ​​the island that is usually a regular stop for fans of cycling outings. In fact, Bimont also organizes outings that begin and end in the cafeteria.

Also, the decoration and setting are designed with cycling fans in mind. However, they welcome all kinds of customers, and according to Riera, everyone is appreciating the premium coffee and selection of cold sandwiches available.

Riera highlights the good acceptance that this service is having and, especially, its contribution to creating a community both among its clients and among other cycling fans who were not among its clients.

The Logroño store Pasión Ciclista, which had a turnover of around 1.5 million euros in 2021, is currently preparing to move to new premises of 1,1916 square meters that will place it in the top 5 of the largest specialized cycling stores in Spain.

According to the owner of Pasión Ciclista, Pedro Ruíz, in the current premises they have “a simple coffee machine and an area with a television to watch cycling events. It is like a very basic waiting room where the client can spend the time that it lasts, for example, a quick repair of his bicycle”.

On the other hand, for the new establishment, which they hope to inaugurate at the beginning of June, a more ambitious café-cyclist project is included.

Ruíz considers that “the store is not only a point of sale but also a meeting point”. The retailer highlights the importance that this cafeteria can have as a meeting place, both for the departure and arrival of the groups. With this, as Ruíz explains, “a greater link with the store is created and, even, the door is opened for last-minute purchases to arise.”

In any case, the retailer emphasizes that “the main thing is to continue working on offering services, beyond what is the pure sale of the product”.

The cafeteria of the store of more than 1,000 square meters that Pasión Ciclista will open in Logroño at the beginning of next June will be very focused on cyclists. Thus, it will have the same opening hours as the store and a variety of healthy food geared towards what the cyclist usually consumes. Its head has already announced that it does not intend to have all the usual offer of a traditional cafeteria.

As for the decoration, it will be specifically designed for the cyclist and, obviously, it will have bike racks.

Ravet Bike opened its new store of more than 1,000 square meters in Granollers last March. The brand new establishment includes a cafeteria. The co-owner of Ravet, Lluís Martínez Ravetllat, explains that the objective “is to reach a greater public and provide more service to customers” and specifies that it has not only been designed to serve cyclists, but also all types of customers. In fact, the cafeteria located inside the Ravet Bike premises is run by the company Papüa, with experience in this sector.

The person in charge of the cafeteria service at Ravet bike, Ferran Caselles, highlights that “for years, the world of specialized coffee has been linked to cycling”. Caselles adds that the design of the cafeteria seeks to expose the link between cycling and nature. In this sense, the place has abundant vegetation, as well as very large spaces to be able to maneuver bicycles and park them.

Ferran Caselles points out that they take advantage of any occasion to enhance the symbiosis with the cycling store. As an example, he cites that, taking advantage of the visit of the renowned Colombian coffee grower, Eladio Rave, the establishment has organized a conference in the cafeteria so that he can speak about the advantages and benefits that altitude brings to both coffee production and cycling training.

The person in charge of the cafeteria service at Ravet bike highlights that they pay special attention to offering nutritious, sustainable options, as well as healthy and beneficial preparations for all customers and, especially, for athletes. He exemplifies it by explaining that to prepare a salad, they boil the potato 24 hours beforehand and cool it to reduce the glycemic index and make it easier to digest.

Voló ebikes opened its establishment in Sitges last November, at the foot of the El Garraf Bimontvolo ebi natural park. The premises include the sale, rental and repair of electric bicycles and, also, a restaurant service. The cafe is open to all kinds of customers and, in fact, is advertised as “a place to eat, drink and relax, whether you’re cycling or not.” 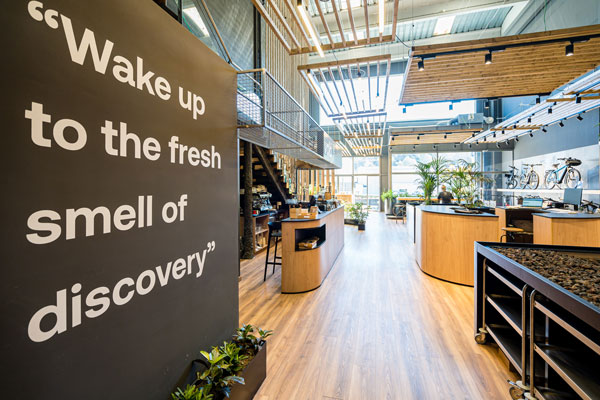 From the Volo Ebikes store, located in Sitges, its manager, Nacho Kindelán, assures that “the cafeteria is an aid to sales”.

The manager of the establishment, Nacho Kindelán, highlights that one of the purposes is “to create a cycling community and for the cafeteria to be a meeting point from which to start the usual outings and at the end return to the cafeteria to do the after-ride” .

The cafeteria also serves as support for the store in other daily situations, explains Kindelán: for example, someone can have a drink while waiting to pick up a repair or for the procedures for buying a bike to be completed… In different circumstances, “the cafeteria is an aid to the sale”, he asserts.

Kindelán points out that they also seek that “the client can enjoy a gastronomic experience”. To do this, the establishment adapts its menus to fresh seasonal products, which it obtains from local suppliers, and offers Premium coffee.

Among the dishes of its current seasonal offer are, for example, Shakshuka baked eggs or vegetable burger. Likewise, for the preparation of cakes and pastries it has an Austrian pastry chef.