Crap, flashed Which exceptions to the driving ban are possible

In the case of a driving ban, there may be exceptions. There are rules for how these are determined. For example, can the employer’s fleet be exempted from the driving ban?

An impending driving ban can be waived in individual cases if there are urgent reasons – these can be of a professional nature, for example. If the waiver is not possible completely, exceptions can also be obtained. For example, a court could determine that a certain type of motor vehicle may continue to be driven despite a driving ban.

However, it is not permissible to set the exception across the board for the entire fleet of an employer, such as a forwarding company or the German armed forces. This is shown by a decision by the Higher Regional Court (OLG) in Naumburg, to which the working group on traffic law of the German Lawyers’ Association (DAV) refers (Az.: 1 Ws 219/21).

Exception of the Bundeswehr vehicles are faulty

The case: A man had driven 41 kilometers per hour too fast outside of town. In the first court instance, this resulted in a fine of 320 euros and a one-month driving ban. It was determined that the driving ban includes all motor vehicles. Only Bundeswehr vehicles were explicitly excluded by the court. Nevertheless, the plaintiff filed an appeal.

In the opinion of the Naumburg Higher Regional Court, the exception for Bundeswehr vehicles was incorrect. For example, it is possible to set an exception to the driving ban for all vehicles in a specific driving license class. Or to exempt a certain type of vehicle from this: For example, it would be conceivable that professional drivers could continue to drive trucks, explain the DAV traffic lawyers.

However, in the eyes of the Higher Regional Court, determining an exception based on make, vehicle, owner, place of use or type of use was inadmissible. Also not possible: to exclude only a certain vehicle from the ban. The Higher Regional Court lifted the fine and the driving ban and referred the case back to the district court because of the error.

Tue Aug 23 , 2022
Fees, cards, service Here’s the best business accounts 07/04/2022, 06:35 am Many business people appreciate the personal connection to their house bank. But does everything really speak in favor of leaving the business account with the previous house bank? Or are there also arguments for direct banks and large branch […] 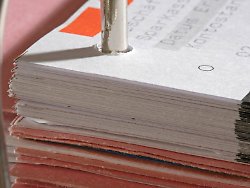