At Lufthansa there is a risk of new strikes after the pilots vote. Getty Images

The members of the Cockpit Association (VC) voted in favor of a strike with a large majority. Flight cancellations and delays could soon occur again at Lufthansa and Lufthansa Cargo.

A labor dispute involving around 5,000 pilots has not yet been declared, but is possible with immediate effect. Above all, the pilots are demanding higher wages.

The VC tariff expert Marcel Gröls sees the results of the vote as a clear “warning signal” to the Lufthansa board.

The airline Lufthansa could soon experience flight cancellations and delays again. In a ballot, the members of the Cockpit Association (VC) voted by a large majority to stop working and fight for better wages. The union reported on Sunday after counting the votes. This means that a strike by around 5,000 Lufthansa and Lufthansa Cargo pilots is possible with immediate effect, but was not initially called.

“He stabs his own government in the back”: Transport Minister Scheuer interferes in Lufthansa negotiations

“Warning signal” to the Lufthansa board: Pilots are fighting for higher wages

Even before the count, the VC tariff expert Marcel Gröls had explained that it was initially a “warning signal” to the Lufthansa board. “Good offers” are now expected from the management. The negotiations have not yet been declared a failure by either side.

According to VC, 97.6 percent voted for the labor dispute at Lufthansa-Passage, and 99.3 percent at the smaller Lufthansa Cargo. According to the union, participation was over 93 percent in both flight operations. Approval from more than 70 percent of all those entitled to vote was required.

The VC evaluated the result as proof of the great support for the goals of the Group Collective Bargaining Commission. “We now need a modern and fair, internationally competitive remuneration structure in all professional groups,” explained Gröls. The positive ballot does not necessarily lead to strike action. But it is an unmistakable signal to Lufthansa that it takes the needs of the cockpit staff seriously.

Only on Wednesday did the Verdi union almost paralyze the flight operations of the largest German airline for a whole day with a warning strike by ground staff. More than 1,000 flights were canceled and around 134,000 passengers had to change their travel plans. Verdi had not held a ballot beforehand. Companies and politicians had criticized the length and scope of the work stoppages. Negotiations are scheduled to resume on Wednesday (3 August).

According to insiders, the pilots’ union could be ready for a strike before the end of the holiday season. In previous years, September was also a particularly busy month, so that a strike at this time would also have a severe impact on the company.

The reason for the strike preparations of the VC are the deadlocked after six rounds of talks about a new wage agreement. From the VC point of view, Lufthansa has not yet submitted a negotiable offer. According to its own statements, the VC demands, among other things, salary increases of 5.5 percent in the current year and an automated inflation adjustment from the coming year. She had terminated the previous collective agreement on June 30th. 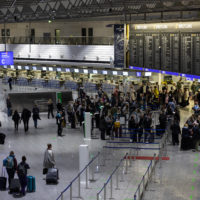 Flight cancellations and long waiting times at the airport: You have to be prepared for this travel chaos in summer

Behind the collective bargaining dispute is a conflict about corporate strategy

In the past, VC had had the exact number of 325 aircraft guaranteed, which may only be flown by the approximately 5,000 captains and first officers who are subject to the group collective agreement. Under the impression of the Corona crisis, Lufthansa had terminated the corresponding agreement and started to set up a new flight operation (AOC) with lower tariff conditions under the crane logo. The new airline, known internally as “Cityline 2”, is to take over key tasks from the previous core company in European traffic.

Al-Sader orders the occupation of the Parliament of Iraq

Sun Jul 31 , 2022
EFE At least a hundred demonstrators and 25 members of the security forces have been injured during Saturday’s protests Baghdad wakes up with its sights set on the Green Zone, where the Parliament is located, which for the second time in 72 hours the followers of Muqtada al-Sader have assaulted. […]