(2-4-2022). Oriol Martí and Víctor Oliva have been the winners in the first and second category, respectively, in the first test of the Somorrostro Trophy 2022 held this afternoon under the organization of the Club Patí Vela Barcelona. With 66 sailors, this fifth edition has registered a historical record of entries.

The Club Patí Vela Barcelona could not have started the emblematic fifth edition of the Somorrostro Trophy 2022 in a more magical way. In addition to registering a historical record of entries in the trophy in this edition (66), in the first race held this afternoon two of its Patrons have been the winners in the first and second category, respectively. In the first, Oriol Martí did it, while in the second, the winner was Víctor Oliva.

Oriol Martí has ​​shown today that his arrival in the first category not only has the endorsements of a title of champion of Catalonia in the second category, as well as champion of the European Cup of said category that have served as a passport to access this 2022 to the queen category, but that he has the ways of a champion and that he will end up being one of those first ones that the first historical ones should begin to seriously consider. He is a discreet, studious, tenacious and attentive patron. And it is that Oriol Martí’s victory in today’s race, in addition to the first one that he conquers as a first category skipper, has been one of those gestated ‘over a slow fire’.

In a regatta field with a ‘roller-coaster’ land wind, at intensity level (from 8 knots to gusts of 21 knots with moments of certain stability around 13-14 knots) and with rolls of 15 degrees, The more than 60 skaters who have taken the start have had enough of ‘dancing’, with greater or lesser success, the capricious designs of a very shifty terral and strong but changing intensity that changed by virtue of the area where each sailor passed . Thus, there have been numerous returns and there have been three holes due to uncontrolled involuntary wild luffing when the terral was fired on the open courses.

The first to pass the buoy on the first beat was David Sainz, from Club Mar i Vent Canet, who was very successful today and did quite a regatón. After him, they have passed, second, the ‘master’ Jaume Llobet, of the Club de Mar Sitges; Txema Orizain, from the Barcelona Swimming Club, third; Oriol Martí, from Club Patí Vela Barcelona, ​​fourth; Quim Esteba, from Club Naùtic Tamariu, fifth…

During the first length, it has been possible to verify how the fleet had been very divided with a group of a dozen skippers who were in the lead, while the rest were at a noticeable distance. And between the group of escapees and the great platoon, Jan Esteba, from Club Nàutic Tamariu, who sailed practically alone trying, of course, to catch up with the leading group.

In the second pitch, Quim Esteba has put the direct and has achieved a notable advantage over the rest of the members of that leading group.

At the start of the second beat, Oriol Martí was the first of the lead group to turn left (facing land) and take the tack by sea, while the rest of the group headed the tack towards land.

The dance of rolls, ups and downs of the wind has not stopped as it had already happened on the first beat. Quim Esteba has tried to score from the head of the fleet, but with such a fickle scene it was difficult to have ‘controlled’ the rivals.

Quim Esteba confirmed this when he reached the buoy on the second beat. Oriol Carrasco and Oriol Martí have passed the buoy before him. And even Jaume Llobet. The ‘Merlot’ skipper passed fourth, ahead of David Sainz, as well as Jordi Maré who passed fifth and sixth, respectively.

During the stern, Oriol Carrasco has managed to maintain the leadership. However, a few meters from reaching buoy 3, the proximity of a boat from the organization has caused him to lose concentration and success and carry out the buoy pass maneuver in such a way that he has ended up ramming it.

As a result of Carrasco’s mishap, Quim Esteba was in the lead at the start of the third beat, while Oriol Martí was in second position. Behind them have passed Jaume Llobet, in third position; Jordi Maré, in fourth…

If in the two previous beats, the first to overcome it had been different in each of them, there was the question of who would be the first to reach it in the third and, therefore, to obtain victory. That was the third time that Quim Esteba started a new beat leading the fleet. Perhaps, this time, his fortune would finally smile on him.

On this third beat, the first of the group at the head to go to the left (looking towards land) was David Sainz. Oriol Martí decided to turn shortly after to keep to the windward side and head towards that side of the course. Quim Esteba, once again seeing himself in a ‘scrub’ of roles, has chosen to remain for a good while on the curb heading towards land, until, finally, he has turned to the left.

However, today’s terral was ‘very into his ball’ or ‘a ball’ different from Esteba’s.

A few meters from the finish, going on the starboard tack, and it was not the first time that this had happened to him, the skipper of the ‘Merlot’ saw how the wind fell on him, while Oriol Martí and David Sainz, who were heading, on the port tack, towards the finish line, they had a very good wind and they advanced with very clear options to overtake him in that final stretch.

ENTRANCE ‘TO THE RHYTHM OF MAMBO’

And as in the two previous beats, in this third, a new leader has been registered again. On this occasion, the first to finish it was Oriol Martí, from the Club Patí Vela Barcelona, ​​who, with a hard-fought event, a lot of patience and few mistakes, knew how to ‘dance’ that upwind better than anyone and crossed the finish line at the rhythm of mambo.

The second to cross it was David Sainz, from Club Mar i Vent Canet de Mar, while Quim Esteba, from Club Nàutic Tamariu, had to settle for third place.

The fourth to enter was Jordi Maré, from Club de Mar Calafell; and the fifth, Jan Esteba, from Club Nàutic Tamariu, and, by the way, absolute winner of the Somorrostro Trophy last year.

The second and last leg of the Somorrostro Trophy 2022 is scheduled for tomorrow with service departure scheduled at 1:00 p.m. 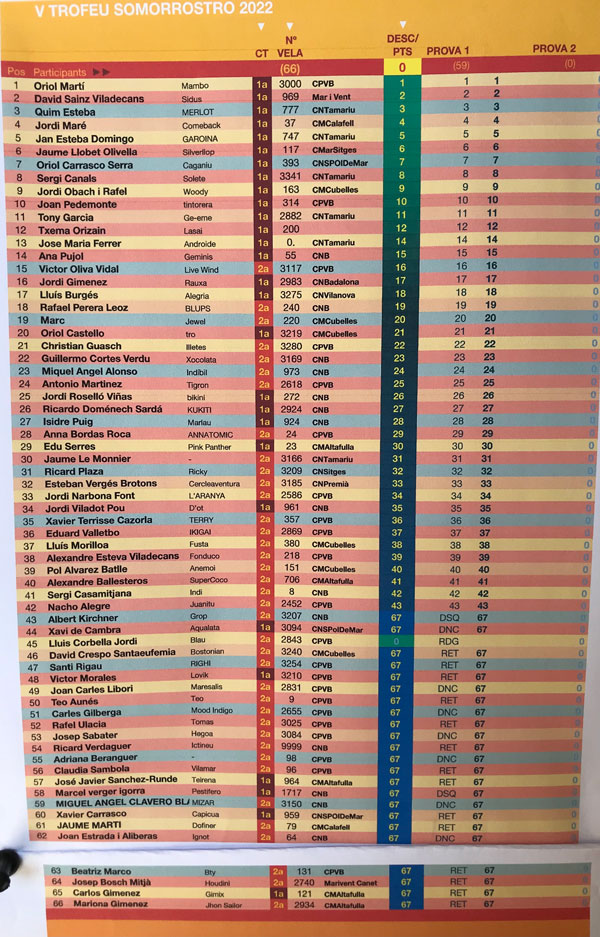 PROVISIONAL CLASSIFICATION of the Somorrostro Trophy 2022, after the celebration of the first heat.

Sun Apr 3 , 2022
Compartir Tweet Compartir Compartir E-mail One of the main tasks of the government is to generate favorable conditions in terms of economic signals and legal certainty for the efficient development of enabling technologies for the energy transition, as stated in an exclusive interview […]