(4-6-2022). Start something lackluster for an edition with a record of participation in the 2022 Championship of Catalonia for senior sailing. Today there have been no tests, probably because of the lack of agility before a weather forecast that announced a calm like the one that has finally occurred.

The chronicle of the first day of the 2022 Senior Sailing Skate Championship of Catalonia could be summed up in a couple of sentences: a day without tests and a ‘pseudo sit-in’ of the fleet before the announced calm.

But let’s go by parts. Indeed, today they have not been able to run any of the two planned tests. The ‘early risers’ who planned to do a training session yesterday, Friday, came face to face with a total calm at the scheduled time of departure (2:00 p.m.) after a lift of about 12 knots blew until around 1:00 p.m. as rolando haba garbi went on, it lost intensity and ended up being nothing at all.

Today, the attention signal was scheduled at 1:00 p.m. The sky was covered in mist, cracked by a few rays of sunlight. Members of the committee on land had already reported at the skippers meeting at twelve noon that the wind was very light (about 3-4 knots) from the east, showing oscillations that ranged from a course of 60 degrees (northeast) to another of 100 degrees. (East).

Thus, the nearly 120 registered patrons spent their time chatting with each other, having refreshments…

Around 1:30 p.m., despite the fact that from the committee that was in the water the reports of little wind and very rough persisted, on land a more intense breeze was confirmed and, likewise, cruise ships were seen passing, girding something offshore and in a northerly direction, with a heeling angle that showed greater wind intensity.

However, the committee did not give instructions to the fleet to go into the water and the postponement flag was still hoisted on the signal mast of the Club Mar i Vent de Canet de Mar.

It was not until 2:15 p.m. when the sailors were allowed to put to sea. The 120 participants have rigged quickly and in just over twenty minutes there was not a skate registered for the competition on land. It was blowing a lift of about 9-10 knots that allowed us to enjoy and get close to the starting line has been fast. 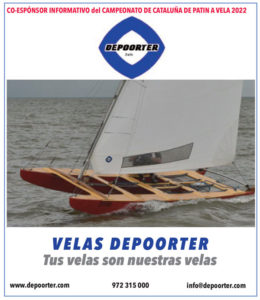 Upon reaching the starting line (it must have been 2:45 p.m.) the fleet was able to observe that the first officer of the committee was at the bow of the ship with the wind-catcher checking that the direction of the lift was stabilizing, while the flag of postponement fluttered on his signal pole.

The fleet has been sailing around the boat and some skippers have even lowered the sail a little, presaging a gale as the wind had already risen to 11-12 knots…

And the first officer has continued to check the direction of the wind with the little wool on the bow of the committee boat.

At 3:15 p.m., finally, the exit procedure for the first ones has begun.

As the minutes progressed, it was found that the location of the viewer was so downwind that most of the skippers concentrated next to the committee’s boat, since going out by buoy was complete suicide.

And, as icing on the stage, the wind has gone a few degrees to the left with which it went straight to the buoy

Anyway, the committee has seen it and has suspended the starting procedure with three minutes to go before the starting honk. And it has raised postponement again.

And again, the first officer has been placed at the bow of the committee ship with the wool and giving instructions to the beacons.

Some of those who were already in Canet yesterday have evoked the calm that prevented them from doing the training test. And they have feared a ‘repetition of the play’.

And the wind has continued to fall. And falling.

And the minutes passed.

And the wind kept falling… until it was seen that it was going to come to nothing; like yesterday.

Some patterns, sensing the aftershock of the previous day, have begun to head towards land.

Until the starting line has been deserted, with the committee boat there alone and on its mast waving the postponement flag…

The fleet of about 120 skates has invested about 45 minutes to reach the beach. Luck of the wave that pushed… and, in many cases, of the rowing or the arms paddling surfer style.

In the end, already in the slipway and then, in the botifarrada offered to the participants by the Club Mar i Vent de Canet de Mar, the fleet has been debating whether it would have been possible to carry out a task if they had taken advantage of the slight breeze that was blowing before two o’clock in the afternoon, if the committee had been more agile, if it had avoided “overzealousness”, if it had listened to some of its veteran skaters, if it had varied and adapted its usual modus operandi of other classes to the of the sail skate class.

A MATTER OF PRAGMATISM

At the Spanish Championship in Formentera last April, very early one morning I met the official Tete Sabater at the club. I recognized the value of having taken responsibility for that competition, after the controversy he had in the Championship of Catalonia last year in Sant Pol de Mar. He smiled. He told me something like ‘everywhere they cook broad beans’. And I told him, after he admitted to me that some officials shy away from ‘officiating’ skate races, that perhaps we skaters are “somewhat demanding, somewhat rare”.

Today I have seen in Canet de Mar that, above all, what we skaters are pragmatic, that we do not demand beats calculated to the millimeter of the course, that we really like to compete with our boat and that a route can be modified on the second beat, if necessary, or even cancel the sleeve if there is an absolute drop in the wind. In fact, that has already happened to us (and not infrequently) and we have fitted them sportingly (some more than others; it is also true).

We regatta skaters like to navigate in the same proportion that we don’t like to wait to start a heat beyond what is strictly logical and necessary.

And we apply that, both in club regattas and in the ‘grand slams’. Perhaps because of that haggling pull that characterizes us and that pragmatism that is so rare and ours is that we are the class that does the most races every week of all the classes that make up dinghy sailing. And probably thanks to the large number of tests that we do, we are so ‘demanding’, because we know how to discern what is essential from what is superfluous, even in a Catalan championship.

Sat Jun 4 , 2022
Attendees at Epsom Downs Racecourse. / EFE Still in “discomfort”, he followed the Epsom Derby on television, which had only been lost twice since 1952 Isabel II was absent this Saturday from all the public events of the celebration of her 70 years of reign and gave the leading role […] 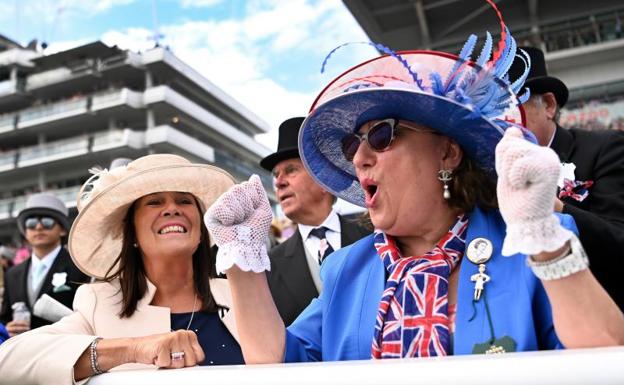