The war in Ukraine is a pulse between past and future. The Soviet yesterday faces today and tomorrow of young people who look to the West, not to the East, and are clear about choosing between Brussels or Moscow. In the dormitories of the University of kyiv, twenty students have been living for three weeks inside the nuclear bunker built in 1965, in the golden age of the USSR.

“The engineers who designed this shelter could not imagine that in the future it would serve to protect us from the bombs dropped by Russia, unimaginable,” says Ludmila Korshan, a graduate in Chemistry who was in postgraduate studies until the outbreak of war. She now lives glued to the Telegram application, her main source of information and in which she has received the news about the peace talks. «I do not trust anything, we must prepare for a long and hard war because the Russians do not keep their word. They have already shown it with the humanitarian runners, they are not trustworthy ».

The fighting has brought academic life to a halt in the country. The students have escaped from the capital or have enlisted as volunteers in the Army. The university’s basement is a labyrinth sealed off by a huge blue metal door. They have prepared a food storage area at the entrance, with food and water for a couple of months.

In the central hallway, foam mattresses lined up, all in a row. And there are also rooms in which they have set up an area for projections and a study room. The idea is to resist until the end and try to continue with the course as far as possible, but the progress of the contest prevents a minimum concentration. On the walls they have drawn a large map of the country «with all its territory, Crimea, Lugansk and Donestk included. We cannot give up a meter of land”, says Ludmila.

Most of these young people come from the east, from the areas under Russian occupation. Aleksei and Valeria are embracing on one of the mattresses. They cry. Aleksei has just received the worst news. His father has died in combat in Rubizhne, a city of Lugansk taken by the enemy. «Russian is my mother tongue, I spoke Russian with my father and many of my friends were supporters of Russia, but Putin has ended all the feeling in favor of him that he could stay in Ukraine. Not even those nostalgic for the USSR accept so much destruction and death, ”says Aleksei, the words coming out of his stomach. The mourning has reached him through a message from a neighbor. He has been trying to talk to his mother for days, but he can’t.

Four floors above the bunker are the bedrooms. Before, 800 students rested here, divided into three-person rooms. Now the corridors are a continuation of closed doors. Until 447 arrives. It’s ajar and lets out the chords of Pink Floyd’s ‘Money’ on the guitar. Oleksandr Pechenkin fills the space with his music. He is 20 years old, he is in the fourth year of Geography and he is from Berdansk. “The Russians came by force and now they are in control of my city. The big problem there is that they are without gas and suffer from power outages. But, thank God, my parents are fine,” says the guitarist, who divides his time between music, studies and campus surveillance, an activity that he has carried out with a knife since there was a very close shooting.

Another issue that worries him is the growing repression of those who go out to protest in Berdansk against the occupation forces. “They are getting tougher and tougher and it won’t be long before they open fire.”

Oleksandr thinks that what Putin is doing “has nothing to do with liberation and a lot of imperialism.” He assures that «the young people of Ukraine now look to Europe, we want democracy, freedom, not to be in the shadow of an eternal dictator». On one sheet of paper he has the word ‘believe’ (he believes), on another small blackboard it is written in Ukrainian “Silly Putin” and on the main wall there is a huge map of the old Soviet Union. «The distance between kyiv and Moscow is barely 800 kilometers, they are sister cities. Why is he doing this?” asks the 20-year-old, continuing to pluck his guitar.

From his room to the nuclear bunker and from there to his room. This is her life now, like that of a handful of classmates who resist on a campus orphaned by students. Four floors separate the Soviet shelter from the room where Pink Floyd plays and dreams of a future without war.

How to create a reminder on iPhone

Fri Mar 18 , 2022
At some point we all have a hectic lifestyle, moved in every way. At this time is when having control of schedules and responsibilities becomes essential, so that it does not become chaos, we have to be organized. Fortunately, our iPhone can help us in this regard by create a […] 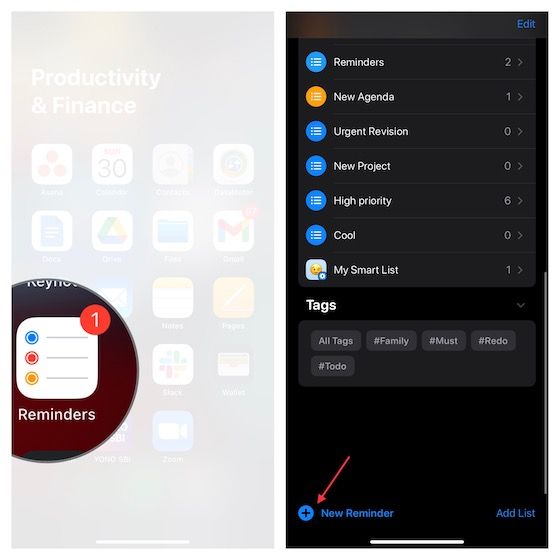