Maria Oliveira and Rodrigo Tamellini, GamerSafer founders (Publishing) SAO PAULO – The world has nearly 3 billion players and they will be responsible for moving US$ 175.8 billion this year alone, according to the specialized consultancy Newzoo. But Brazilians Maria Oliveira and Rodrigo Tamellini are eyeing the backstage of these large numbers. The entrepreneurs moved to Silicon Valley, an American region known for the concentration of technology companies, and created a startup that tackles a problem common to players: social interactions negative and even criminal. GamerSafer works with game publishers to recognize identities and prevent cases of child grooming, harassment, bullying, religious intolerance, racism, sexism and financial fraud. The startup had its first major client: Minecraft, a game purchased by Microsoft and which has 140 million active players, according to statistics website Statista. This week, GamerSafer announced the capture of its first external investment. The pre-seed contribution of R$ 3 million will be used to expand the workforce and invest in technological infrastructure. The investors were Indicator Capital and Kerpen Ventures funds; the Wayra innovation space, from Telefônica/Vivo; the TheVentureCity accelerator; and the angel investor groups Harvard Angels and GV Angels. From Zero To Top, entrepreneurship brand of InfoMoney, spoke with co-founder Rodrigo Tamellini about GamerSafer’s business model and about the new investment.

Cybersecurity: behind the scenes of games

Maria Oliveira and Rodrigo Tamellini moved to Silicon Valley about seven years ago, when Tamellini was transferred to the headquarters of the technology company Intel. An engineer, Tamellini was previously responsible for the company’s products for Latin America. Maria, on the other hand, founded a consultancy for environmental and social projects in Brazil, and started working on fostering entrepreneurship when she moved to the United States. Both had a personal interest in games. Tamellini became director of Intel’s gaming division. The company mainly supplies hardware, such as high-performance processors. But it also maintains a strong relationship with game publishers, to understand how games are running with the equipment and what technologies can be added. “I’ve been following the trends in this market for years. Socialization is a very important component that has grown up in these pandemic times. But this same interaction brings challenges,” says Tamellini. An Anti Defamation League (ADL) study done in 2019 showed that 74% of American players had faced some form of harassment. 53% of these users reported that attacks were based on criteria such as race, religion, gender, gender identity, sexual orientation or ethnicity. Another 29% reported that personal information had already been publicly exposed against their will (“doxing”). “I was not satisfied with the investments already made to try to solve the problem. So Maria and I decided to quit our jobs and create our own solution.” GamerSafer was founded in May 2019. The startup works with identity verification to prevent crimes in games and promote better social interactions. Prevents from crimes to people – such as grooming minors, bullying, racism, sexism and religious intolerance – to fraud within games, such as creating various bots or using someone else’s credit card to buy coins that are only valid in-game. ” Every game has a more common problem. We found two reasons for such attacks to happen: there is a high level of anonymity on these platforms, and the connection between online players follows purely technical criteria”, says Tambellini. To solve the first reason, GamerSafer uses facial recognition to analyze 25 points of the face of each user, including a technology that ensures that the person is alive and not a photo or a deepfake video. The distance between such points becomes a graph with coordinates, later translated into an encrypted code. “You can’t rebuild the face from this code, creating unbreakable protection via reverse engineering,” adds the co-founder. GamerSafer claims that the face scanning process takes less than a second and can happen at different times, such as the first access , shopping, tournaments and chatting online. GamerSafer keeps all data anonymously and claims to comply with regulations such as the General Data Protection Act (LGPD). The information is used for each account to be linked to a real identity, but such identity does not appear in the games. “The user will not be able to create another account and that brings responsibility. He understands that his behavior becomes tied to continuing to play a game he likes. Before, his account was suspended and he just needed to create a new one.” To specifically prevent financial fraud, GamerSafer combines identity verification with analysis of consumer habits. If the user usually buys only on weekdays and several transactions appear in the early hours of a weekend, for example, GamerSafer may ask for additional proof of identity. To improve the connection between online players (matchmaking), GamerSafer provides more information for game publishers. Generally, connection between players only follows criteria such as server or region. “We can provide data such as whether the user is a minor or an adult or if he is used to playing competitively or casually. Thus, we map conflict triggers and reduce such interactions anonymously”, says Tambellini. The focus is on solving problems before they happen, and in a scalable way. “There are several tools to manage a crime after it happens. But we’re attacking the top of that funnel: making sure a user is real and that they’re held accountable for what they do. In this way, we also ease the team’s subsequent work to moderate the interactions in these games”, says the co-founder. Identity recognition works across different games and across different platforms (such as computers, consoles and cell phones). GamerSafer operates on the B2B model, selling its technology to game publishers. The startup serves five electronic sports platforms (esports), which hold online championships and need to prevent users from creating multiple accounts to increase their chances of taking cash prizes. More recently, it also won a major client: the game Minecraft. “The attacks hurt the revenues of these companies, including non-financial crimes. Harassment leads the user to quit the game, influencing metrics such as CAC [custo de aquisição do cliente] and LTV [lifetime value, dinheiro gasto pelo usuário durante todo seu tempo de interação]. In an extremely competitive market, these are indicators that always need to be improved”, defends Tambellini.

New investment and optimism with expansion

GamerSafer will use 70% of your pre-seed round to grow the team. The startup has 11 employees and will hire four more people in the coming months. The remaining percentage goes to improving its technological infrastructure. “It’s a constant investment for a company that depends on capturing and processing data,” says Tambellini. In terms of expanding clients, the startup hopes to deepen the relationship with current companies, such as Minecraft, and only later work with more publishers of games. “We have a long sales cycle, as it is a serious matter for these companies. It’s worth talking very well with each client.” The operational balance between income and expenses should be reached in the first quarter of 2022. “We are still accelerating, seeking to consolidate our performance in the market. We are more focused on growth than profitability.” For Tambellini, each investor in the pre-seed round brings access to human capital and business opportunities. “The customer needs to be confident in our capacity for scalable but sustainable growth. Investors bring credibility.” Indicator Capital is a manager that invests in early stage startups. Its focus is on innovations that transform and accelerate business. Indicator has invested in 17 startups in all, including GamerSafer. The fund had previously invested in the ARVORE Immersive Experience virtual and augmented reality game studio. “We analyzed GamerSafer’s evolution for nearly a year before reaching an investment decision, and during that time several goals were achieved and reinforced our confidence in the capacity of execution of the founders”, says Fabio Iunis de Paula, partner at Indicator Capital, in a statement sent to From Zero To Top. “We conclude that this is an extraordinary opportunity to position ourselves in the urgency for more security in the online collaborative gaming industry. The startup is in line with our thesis of digital transformation and technologies for good.” On the other hand, Wayra is an innovation space and a corporate venture capital fund created by Telefônica/Vivo. Wayra is in ten countries and has invested more than R$300 million in 800 startups over ten years. In Brazil alone, it invested in 82 startups in nine years. Wayra invests in the seed and series A stages, accompanying other investors and writing checks for up to US$ 250,000. “We only invest in companies that we can contribute as a strategic investor, going beyond money. We provide a connection with Telefônica/Vivo and lessons in scale and internationalization, taking advantage of our presence in several countries”, says Livia Brando, director of Wayra in Brazil, in a conversation with From Zero To Top. “GamerSafer caught our attention because it operates in important verticals for us: cybersecurity and entertainment through technology. Several of Telefônica/Vivo’s clients are gamers. We know how big the market potential is, and that the startup fights a relevant problem with a scalable solution. The thesis was further validated with the experience of the two founders and the association with Minecraft”, says Livia. Both Tambellini and Livia are optimistic about the solution’s growth, especially due to the adoption of the 5G internet network. In Brazil alone, there are 88.4 million players on smartphones, with accumulated sector revenues of US$ 1 billion for 2022, according to Newzoo. “Brazil is a case of mobile penetration, although latency is a big problem. So the experience will be much better with 5G, attracting more players,” says the co-founder of GamerSafer. “The experience will completely change. We are extremely connected with the arrival of 5G in the country, so we are an obvious investor in a startup like this”, adds Livia. The 5G should arrive in Brazil in 2022.Discover the management model that made XP grow exponentially over the last decade, and how to apply it to your business. Watch the Jornada To Topo series.

Tue Jul 27 , 2021
When the picture was taken in 2012, Daniel Krauss, André Schwämmlein and Jochen Engert (from left) were still working on seven square meters in Munich. Back then as Gobus. Today known as Flixbus Flixbus Some criticize them as merciless monopolists, others celebrate them for their successes. The Flixbus founders Daniel […] 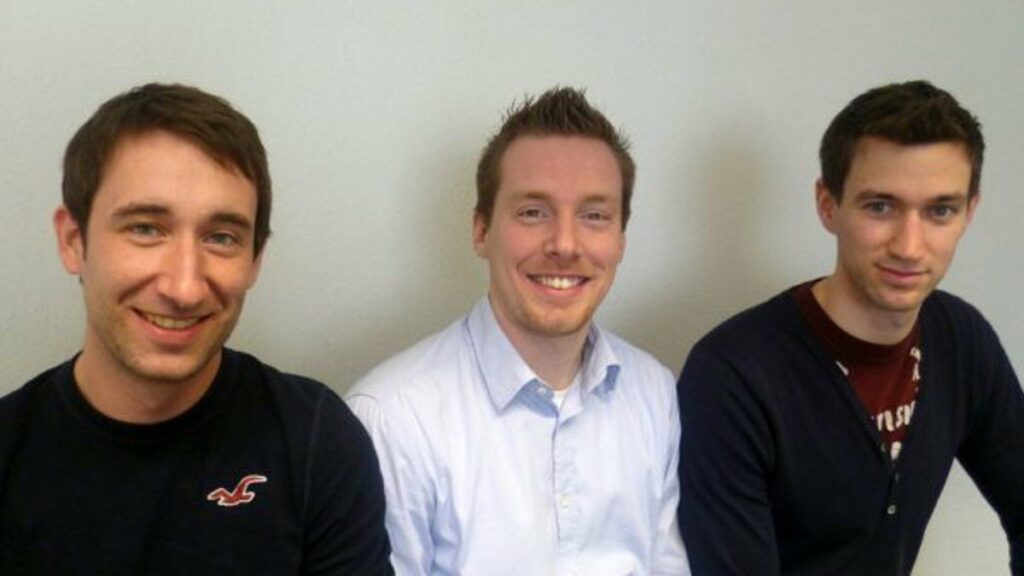