After the earnings season and with a scenario still of strong volatility for commodities, market analysts have revised their estimates for stocks in various sectors.

In recent days, several changes in recommendations have gained prominence. Bradesco BBI reduced the recommendation for pulp and paper stocks, while JPMorgan raised it for shopping malls, with an eye on the Selic drop. Credit Suisse, on the other hand, reduced recommendations for growth-related stocks.

Bradesco BBI reduced its recommendations for the shares of the main Brazilian pulp and paper companies. Analysts noted that it has been a difficult year for Latin American pulp and paper stocks, which surprisingly underperformed other commodities.

The bank believes that the sector’s stocks are unlikely to perform well in an environment of falling pulp and paper prices. Analysts expect a scenario of falling commodities in the segment amid weaker supply and demand fundamentals.

Thus, BBI downgraded Suzano from outperform (equivalent to buying) to underperforming (equivalent to selling) and reduced the target price from R$80 to R$56, which implies a potential for an increase of 13.1% against the price of Tuesday closing of R$ 49.51.

The bank also lowered its Klabin recommendation from outperform to neutral, with a target price going from R$37 to R$27, which represents a potential for a 31% increase in relation to Tuesday’s closing price of R$20. .61.

Klabin is now BBI’s preferred name among the sector’s assets, given the resilience of the results and the lower direct exposure to pulp prices. The company is also ramping up growth projects in 2023, which should contribute to cash generation and earnings dynamics, analysts say.

For Suzano, while they continue to see good value over the long term, they think the stocks are likely to perform poorly in the next 6 to 12 months.

“We were less concerned about the dynamics of the pulp market for 2023, even in an environment of high supply, as we were more constructive about European and Chinese demand. However, we are now incorporating a more challenging macro environment in Europe, while Chinese demand remains hazy and can only be supported by some resupply.”

Credit Suisse raised its target price for Locaweb from BRL 9.50 to BRL 11, up 6% from the closing price on Tuesday (23) of BRL 10.36, after strong revenue growth in the second quarter. However, the Swiss bank downgraded the stock from outperform to neutral for valuation reasons after the shares rose 79% in the last 30 days.

Credit Suisse’s research team maintains a very positive structural view of the company’s prospects. However, he assesses that the current share price is stretched.

Analysts raised their estimate for 2022 revenue by 2% and 2023 by 4%, maintaining gross merchandise sales (GMV) assumptions.

The higher revenue comes from the result of very strong growth in Bling (ERP), Better Shipping (Logistics) and Vindi (Payments) as well as a positive Squid reading in the quarter. Analysts see as a positive factor the fact that the company does not depend only on the growth of e-commerce, having other levers.

“In addition, we were struck by the growth of Locaweb’s e-commerce platform by 10% when the market in general fell by 4%, reinforcing our vision of a very competitive product on the part of Locaweb. Margins should go back to a level of 20%, but it should take a few years. The synergy of recent mergers and acquisitions should take 3 years”, he says.

In a report, JPMorgan highlights that it still sees Selic as the next great catalyst for the shopping mall sector and believes that more and more investors will start pricing in a lower interest rate in the sector as the easing cycle expected to begin approaches. in the second quarter of 2023.

According to analysts, lower rates would benefit the industry in two ways: (i) assuming real rates can return to January 2020 levels, the industry could trade again at a multiple of around 22 times the price (P) on operating cash flow (FFO), or P/FFO, representing an upside (potential for appreciation) of 75% compared to current multiples of approximately 12.5 times; and (ii) the 0.5 point drop in the Selic rate could lead to an increase in FFO for 2023 between 1.5% and 3%. In addition, the bank points out that malls have between 75% and 87% of their debt linked to floating rates, with IGTI being the most exposed.

JPMorgan updated its recommendations for Iguatemi (IGTI11) considering an attractive valuation, with the stock trading at a 15% discount, weak asset performance this year, and upside “risks” in earnings projections due to greater exposure to downsizing. from Selic. Iguatemi is the second company in the sector in the order of preference of JPMorgan, behind only Multiplan (MULT3). The target price for the IGTI11 units is R$27.00, up 32% compared to the previous day’s close.

For brMalls, in light of the approval of the merger by the shareholders of the company and Aliansce Sonae (ALSO3) on June 8, analysts at the bank incorporate the terms of the agreement in the target price of December 2023. The target went from R$11.50 to R$12.50, which represents an upside of 44.3% in relation to the closing price on Tuesday (24) of R$8.66.

In addition, analysts point out that “brMalls is currently trading at a 2.0% discount from its R$8.83 incorporation price at the last close (August 23), making it more attractive to buyers. shareholders operate the transaction through BRML3 instead of ALSO3”.

Credit Suisse raised the target price for the ABEV3 share from R$16.50 to R$18, an upside potential of 16.6% compared to the previous day’s close and maintaining an outperform recommendation. The target increase occurred to incorporate better-than-expected results in the first half of the year, increasing the projection of Ebitda and earnings per share for 2022/2023 by 9% and 16%, respectively.

“The stock used to trade at a premium of around 20% to a high-quality basket, but now trades at a discount of around 32%. Furthermore, strong revenue dynamics combined with a more favorable cost outlook in 2023 support a more constructive view, especially for investors with a shorter investment horizon. Credit sees the stock trading 30% below its historical average and thus reiterates its outperform recommendation given the unwarranted asymmetry between solid fundamentals and discounted valuation.

Credit highlights the company’s excellent execution and fundamental mindset shift, while the perception is that investors are looking at the glass “half empty”, focusing on margin pressure. “While we agree that it is important to recover margins, we also recognize that Ambev is undergoing a digital and cultural transformation, and so the new level of sustainable margins must be structurally different from what it was in the past. That said, we believe it is a matter of time before margins and ROIC [retorno sobre o capital investido] recover”, assess the analysts.

Itaú BBA resumed coverage for capital goods with a positive view of the sector, based on the momentum of improving earnings (gradual normalization of the supply chain, mainly semiconductors, relieving production bottlenecks; falling commodity prices, favoring margins) and depressed valuation (the sector is near its lowest level in nearly a decade in terms of EV/Ebitda, or firm value to Ebitda), which together translate into an attractive asymmetry for some of the stocks.

“Capital goods shares suffered in comparison with the Ibovespa in the last 12 months due to the increase in the cost of capital and greater perception of risk resulting from the shortage of semiconductors and the global economic slowdown”, explain analysts.

Marcopolo is the top pick in the sector by the BBA. “Improved demand and a more interesting mix have already materialized in Marcopolo’s 2Q22 numbers. In our view, these tailwinds are likely to continue, resulting in higher operating leverage and greater profitability.” They are also bullish on Tegma and Fras-le due to the recovery of transported vehicles for the former and the latter’s resilient business model.

Dotz (DOTZ3): downgraded by Credit, with price target cut by 86%

The day before, Credit Suisse downgraded the recommendation for Dotz’s shares from outperform to neutral and reduced the target price from BRL 22 to BRL 3 (an 86% drop). There was a reduction in revenue estimates to 22 by 49%, while there was an increase in cost of capital from 14.5% to 18.3%.

Dotz’s thesis is based on the idea that the company will be able to expand the monetization of its 53 million loyalty users through its marketplace and techfin platforms. And in this sense, the signs indicate that Dotz is heading in the right direction, with marketplace and techfin accounting for 20% of total revenue in 2Q22 (versus 16% in 2Q21) and an increase in Average Revenue per User (ARPU).

However, despite the good results, after a year of high investments since the IPO, analysts expected that the new segments would gain strength at a faster pace than had been seen.

Credit also highlights that the company’s market cap of R$350 million is just R$110 million above its net cash position in the second quarter.

“Dotz’s loyalty business used to be cash flow positive, and its fair value would likely more than justify Dotz’s current market cap. However, as Dotz uses its cash resources to develop new businesses, we believe its firm value may remain under pressure until clearer signs of accelerating growth appear. The user engagement rate appears as the main variable for the case”, the analysts point out.

Itaú BBA raised the target price for Banco do Brasil shares from R$44 at the end of 2022 to R$53 at the end of 2023, noting that the state-owned financial institution reported one of its strongest quarters ever recorded in the second quarter. – and analysts don’t think it stops there.

“Therefore, we decided to increase our net income projection for 2022 and 2023 by 16% and 24%, respectively, leading to a return on equity (ROE) of around 20%. Thus, we reiterate the purchase recommendation for BBAS3”, they evaluate.

Wed Aug 24 , 2022
Digitally equipped Good apps and gadgets for cyclists 06/28/2022, 09:38 am (updated) In the summer, many people ride their bikes. Numerous apps and some gadgets make their life a little easier. Depending on the individual project, very different items of equipment are recommended for the bicycle. Whether you ride your […] 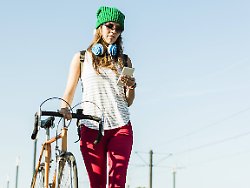