From 2 to 4 September Emergency will remind you that peace is a truly viable choice based on the knowledge and practice of human rights.

Again, in 2022, we choose war, that is, we accept the suffering of civilian victims, we deny human rights, we invest in weapons and not in education, health, work. Because of this Emergency wants to reiterate its firm no to armed conflicts during the second edition of Emergency Festivalin program from 2 to 4 September 2022 in Reggio Emilia. Three days dedicated to themed meetings and debates “The choice“, The worst that can be done, that of war. Or the best: don’t do it. Because another way is possible, as the founder of the NGO claimed, Gino Strada, which has been caring for civilian victims of conflicts since 1994: “It is not a question of lacking resources, but of choices that are not made. The time has come to decide what priority we give ourselves as a society: people’s lives or war? Health, free education, decent work and protection or hunger and suffering for many? It is not too late to go in a fairer direction ”.

Writers, scientists, philosophers, journalists and voices of the contemporary world are committed, together with the representatives of Emergency, to reflect and make the festival participants and the whole community reflect on the reasons that lead us even today to take up arms. The events are all free and can be booked here.

No more war: the photographic exhibition by Giles Duley

The first event that we point out to you at the festival is a photographic exhibition. The communicative power of the images, in fact, especially when it comes to war, is enormous. Imagine the power of shots taken by a photographer who is an innocent victim of a conflict. In 2011, while working in Afghanistan, Giles Duley was seriously injured by an explosive device and suffered a triple amputation.. “I lost a lot that day but that experience also allowed me to gain insight into the war-wounded that few storytellers have. I was literally in the shoes of those I wanted to tell. From the moment I regained consciousness in the intensive care unit in April 2011, I had only one thought: in Afghanistan to photograph the injured civilians like me ”.

Simply No more war, is the title chosen for the photographic exhibition organized by Emergency as part of its festival which begins on 2 September and will then be open until 25 September. The exhibition itinerary starts from the shots taken by the photographer a Kabul right in the Surgical Center for War Victims of Emergency, just before the Taliban took the city but then continues with works by other artists. Duley will also be the protagonist of a match Sunday 4 September at the festival during which he will bear his testimony on the failure of twenty years of Western intervention in Afghanistan and of any foreign policy based on violence.

Emergency surgical center. A woman with her hands injured by a mortar round that fell in her garden while she was doing the laundry © Duley

Emergency surgical center. Said Karim. A bricklayer who lost his legs when his car passed over a mine © Duley

From Kabul. 11-year-old Zahra, wounded by a bullet © Duley

Emergency Surgical Hospital in Erbil Gathban Mahmood, 22, was about to graduate when ISIS took control of Mosul. When Iraqi forces cleared his neighborhood, the schools reopened. After more than two years of waiting, Gathban finally managed to finish his studies. Her mother to him, Amira, described how she bought him some new clothes and watched him proudly as she walked out their back door to go to her graduation. When the door closed, there was an explosion outside. She ran outside to see that an ISIS drone had dropped a bomb and her son was lying in their yard, he had lost both legs © Duley

The other events not to be missed at the Emergency Festival

Three days to talk about how to avoid war. For our choices among the vast Reggio Emilia program, let’s start Friday at 18:00 with a dialogue between Marco Tarquinio, director of Avvenire; Donatella Di Cesare, philosopher and writer; Mauro Biani, satirical designer; and Edith Bruck, writer and poet (in connection): are there conflicts without alternatives? Are there really inevitable wars? War appears inevitable to those who have never done anything to avoid it, to those who have never chosen to undertake the path of protecting human rights with courage.

Another dialogue is certainly very interesting Friday at 19:30 who wants to investigate what are the costs for the planet and for humanity due to war. Talking about it Malaika Vaz, National Geographic explorer and director; Natalie Bennett, member of the House of Lords and former leader of the Green Party of England and Wales; Giovanni Mori, Fridays For Future activist and energy engineer and with the video contribution of Omar-Dario Cardona, professor and winner of the United Nations Sasakawa Prize for disaster risk management.

Saturday at 5pm Giuliano Battiston, journalist; Laura Silvia Battaglia, reporter; Francesca Mannocchi, journalist and writer moderated by Riccardo Iacona, reporter, author and presenter of Presa Diretta Rai 3 will talk about contemporary wars and the difficult task of giving a voice to the victims. A video contribution by photographer Farshad Usyan will also be screened. On Saturday evening at 9.30 pm the show at Teatro Valli with Daniele Silvestri and Stefano Fresi to remember Gino Strada.

Sunday morning from 7:30 to 10:00 an urban crossing to Reggio Emilia to start the last day of the Emergency Festival with calm and reflection.

Traveling with Regios: This is how the holiday trip works with the 9-euro ticket

Tue Aug 30 , 2022
Going on holiday by train? With the start of sales of the cheap public transport ticket, this is cheaper than ever. But it also requires planning. Here are answers to important questions about the 9-euro trip. Travel to your holiday destination for 9 euros: The special ticket for local public […] 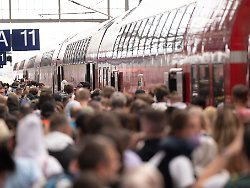