The assailant released a canister of smoke and began shooting at the travelers, for no known reason, before fleeing

An intense police operation was searching last night – Spanish time – for a suspect in the shooting recorded in a subway car in the New York neighborhood of Brooklyn. He fled armed and wearing a vest similar to those used by construction workers and a gas mask. He previously threw a smoke canister on the train to distract the crowd before opening fire at the 36th Street station at point-blank range. At least 29 people were injured, a dozen of them by bullets, and five were admitted in critical condition. critical.

A harrowing eyewitness video – later released by The New York Times – captured the moment of chaos as a rush of terrified passengers rushed out of a smoke-filled carriage, followed by others bleeding. Although there was an initial concern about the possibility of explosive devices, the Police quickly ruled out this risk, as confirmed by their spokesman, Keechant Sewell, who was unable to specify which weapon the assailant used in the attack or how many shots were fired.

The Corps urged the collaboration of the witnesses while its agents intensified the capture operation described as an ‘active shooter situation’. The suspect appears to be a black male with a heavy build. Under the vest he was wearing a gray hoodie and carrying a backpack. 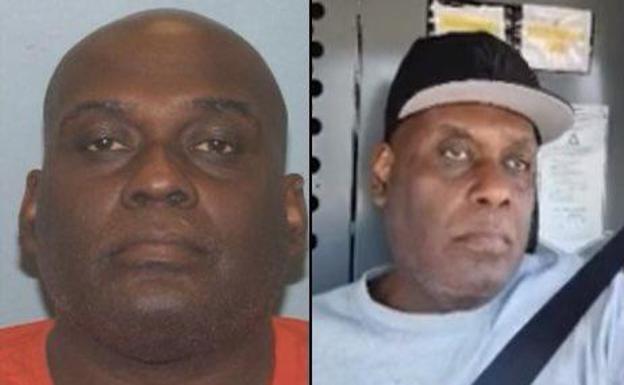 Image released by the New York authorities showing Frank James, the “person of interest” related to the attack. / EFE

The events were precipitated when a team of firefighters responded at half past eight in the morning – early afternoon in Spain – to an alert for the exit of several columns of smoke at the 36th street station in the neighborhood of Sunset Brooklyn Park. The first police units that showed up found several injured people, as well as several unexploded devices, although none with active explosives. The Department of Firearms and Explosives, as well as other state and federal groups, joined the investigation to provide assistance to the New York Police. Morning trains suffered significant delays during rush hour, leaving thousands of commuters without service on their way to work.

New York City Mayor Eric Adams has stated emphatically that he will not tolerate his neighbors being terrorized by violence, even if it is a single individual. Adams, who followed the investigation from his residence, where he is confined after testing positive for Covid-19 on Sunday, spoke live on several morning television programs to assure citizens that the situation was under control in the subway after the deployment. of police security measures.

The Police found several artifacts inside the station, although they later found that they lacked explosives

Shootings have been on the rise in New York since the beginning of this year despite a downward trend in gun violence reaching record lows in 2018 and 2019. Still, New Yorkers emerged from the two-year pandemic lockdown to a most dangerous city

Adams, who was a member of the Police, has made the fight against crimes with firearms a priority of his Administration, especially after the recent spate of violent attacks on the subway, which have increased in the last year. For this reason, the mayor has increased the surveillance programs of trains and stations, something that the directors of the metropolitan transit system had been urgently requesting for months before his mandate. In recent times, the New York City Councilor has also ordered the deployment of seven new anti-weapon units to patrol the streets of New York.

How to AirPlay on Roku with iPhone, iPad, and Mac

Wed Apr 13 , 2022
It is very simple use AirPlay on Roku, in this way we will be able to duplicate the full screen or share certain contents of specific applications on iPhone, iPad and Mac with our Roku TV. We can even use it to watch movies and series from the best streaming […]