Alex and Vorovenskiy and Anabell Sotello wait at the gates of the ProEnglish Theater in the Shulavka neighborhood of Kiev, very close to the enormous cement mass of the Polytechnic University. Ukrainian artillery thunders in the sky, trying to keep the enemy away. There are also loose bursts of machine gun fire. Not a soul in sight. The only theater for works in English in the capital is still operational, it has not closed its doors, although it now functions as a bunker in which forty artists, directors, neighbors and pets take refuge.

Two weeks’ worth of food and water have been stored in the kitchen, and the ‘Hollywood’ room, where they used to hold performances, is now a large bedroom with mattresses on the floor. “We are going to resist until the Russian soldiers arrive, then we will evacuate because nobody wants to live under the orders of a dictator,” says Anabell, who combines her work in the theater with the edition of books on Latin America with the Compás label. This young half-Ukrainian, half-Nicaraguan, keeps in the safest part of the theater several boxes with her treasure, the Ukrainian edition of the best-seller ‘El olvido que seremos’, by Colombian author Héctor Abad Facioli. “It is a special book, which transcends borders and by an author who has contacted us to find out how we are doing, closely follows the evolution of the war, fascinating,” says Anabell, who left her apartment on the first day of the war heading to the theater thinking it would be for one night only and now he does not dare to predict how long it will last.

While many young people choose to take up a weapon and join the popular protection units that patrol the neighborhoods, in this theater the resistance is based on “literature, poetry, piano, guitar, stories, board games… A place where you can having the ability to resist mentally, not just physically,” says the editor, who is also an actress and director of plays. She was responsible for the premiere of Hedda Gabler, the play by the Norwegian playwright Henrik Ibsen, which was the last one that could be seen in this venue before the outbreak of the war.

Daniel, 25 years old and a native of Odesa, carefully follows the words of his director, he had the main role. The day of the opening seems to him a very distant past, “but at least we have the great fortune to live in a theater turned into a refuge and that keeps us alive from an intellectual point of view.” 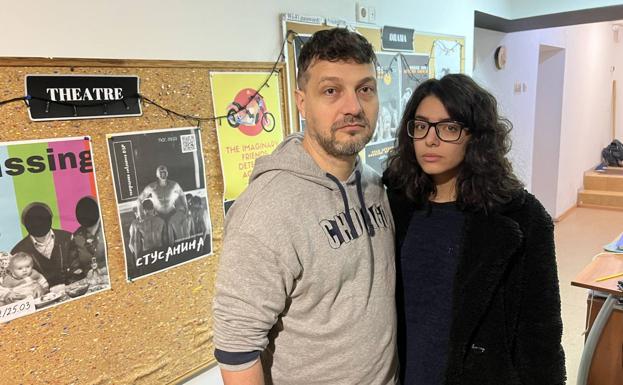 ProEnglish is also a drama school and young people who dreamed of being actors went there. Now it is the residents of the neighborhood like Tatiana, who had never been to the theater, who receive shelter. They live temporarily in the room that used to be the dressing room and are with their son, Nikita, who “asks a lot of questions about the situation, but here at least he is distracted with so many stories and things to do, it is the best refuge that we have seen”, affirms the mother.

Kiev lives underground since Vladimir Putin gave the order to his troops to launch the attack. The population that remains in the capital thus feels safe from bombing and artillery fire. The mayor of the city, Vitali Klitschko, estimates that 15,000 residents sleep every night in the metro system alone, but later bunkers have emerged in all the neighborhoods in which people organize to be as close as possible to their homes.

Alex was the father of this theater eight years ago now and “I’m counting the days until the war ends and art returns, we have a major premiere in mid-March, so Putin can take note and retire,” he jokes. The art is now maintained with video messages that are recorded daily and posted on YouTube aimed at encouraging the residents of Kiev. There is one in particular that Alex would like to send, but not to the residents of the capital, but to the tenant of the Kremlin and without jokes: «As a Ukrainian, Vladimir Putin, I can only tell you to go to hell».

The curtain closes. Alex, Anabell and the rest of the theater tenants return to their mattresses to spend another day sheltered from the bombs. It is not a work, it is reality. Shulavka is on the route that, if the Russians enter from the north, they will take to reach Maidan Square. It seems that what Putin wants most is to see that picture of the tanks of him passing through the heart of Kiev, it is the only end he contemplates for this tragedy to which he has subjected his Ukrainian neighbors. For the first time, the actors of the ProEnglish Theater are protagonists of a work that surpasses all the fictions they have performed for eight years: war.

Sat Mar 5 , 2022
Table of Contents Down payments can frequently be made without an ID check, whereas withdrawals almost constantly require phone number verification. Select favored payment method and load the types. Most casinos choose to withdraw using the same solution as deposit. Down payments and winning from gambling are not tired. Gambling […]