(17-6-2022) Aossa Global has been awarded the concession for the construction and service provision of the sports center that the City Council of Paracuellos de Jarama, a municipality located northeast of Madrid, put out to tender. The contract, valued at 37 million euros, was initially awarded to BPXPort, a company that ended up withdrawing its offer after the deadline for the tender expired.

An alleged administrative negligence in the City Council of Paracuellos de Jarama has allowed the sports services company Aossa Global to end up being awarded the concession contract for public works and operation of the sports center with an indoor pool and additional services on the municipal plot located on the street Picos de Europa in this Madrid municipality.

This contract, valued at 36.9 million euros and with a base budget of 4.7 million euros, was awarded to the Basque manager BPXPort, as CMDsport reported at the end of March. Their offer bettered that of Aossa, the other company that bid for this project. The City Council demanded a justification from BPXPort for the reckless dismissal presented. The company considered that there was a “dysfunction” between the data in the feasibility report of the specifications and the study provided.

BPXPort provided a justification in relation to aspects such as energy savings, management potential and user estimates. After having reviewed the documentation provided in the justification for the offer, the local administration concluded that “although it is a very optimistic position of the data, it is not impossible to achieve”. Thus, the Basque manager managed to get the City Council to end up accepting its offer. The consistory recognized that it accepted this proposal on March 24.

As provided for in both the Public Sector Contracts Law and the bidding document itself, the council had an administrative period of two months to award BPXPort this project. This, however, did not take place, which led to the withdrawal of BPXPort’s offer, leaving Aossa as the sole bidder.

VOX ASKED FOR A NEW TENDER

One of the formations that voted against the award, VOX, called on the council to open an investigation to analyze what happened as well as a new tender “to safeguard the interests of the neighbors.” According to this political party, the municipal officials “failed to comply with their obligation to award the contract within the established period, causing the best offer to be withdrawn.”

This formation argues that the offer presented by BPXPort represented a decrease of 2 million euros with respect to the required subsidy, in addition to an increase in the annual canon to be paid to the city council of 10% on the minimum tender, which would have meant more than 200,000 additional euros of canon per year. For the total of the contract, it supposes that the City Council stops entering 3.2 million euros. In addition, it returned the property of the sports center to the council after 15 years of operation, 7 less than the 22 to which Aossa has been granted. This means, for the municipal coffers, a loss of another 4.2 million euros. In other words, the difference in offers will mean, for the council, an added expense of around 9.5 million euros with respect to the BPXPort offer.

With more than 30 years of experience, Aossa Global is a company based in Seville that provides sports, socio-educational and welfare services throughout the Spanish territory. They currently work in 14 sports centers throughout Andalusia, Catalonia, the Community of Madrid. They will soon be released in the Canary Islands, where they have been awarded the management of different municipal complexes in La Oliva and Corralejo.

Fri Jun 17 , 2022
The authorities receive the bodies found in a remote region of the Amazon. / EFE The investigation is now focused on clarifying whether the other remains that have been found correspond to the Brazilian indigenous man who was also murdered. EFE Friday, June 17, 2022, 23:18 The Brazilian Federal Police […] 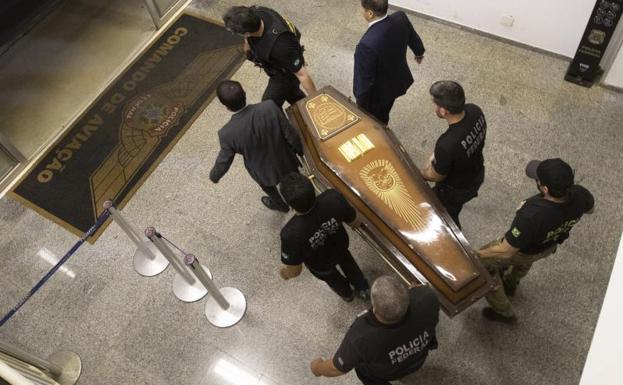