As a result of its innovation strategies, Adidas maintains that it would have more than 800 patents, including those for technology incorporated in its various applications, and that, according to the complaint, Nike would be infringing through its Nike Run Club and Training Club applications, SNKRS and Nike Adapt.

(13-6-2022). Adidas has filed a lawsuit against Nike, in which it accuses the North American company of having infringed nine of its patents “knowingly and intentionally”. The lawsuit was filed last Friday, June 10, in a Texas court.

According to Adidas, Nike’s SNKRS application, among others, would infringe nine of its patents. This is how the brand of the three gangs that filed a lawsuit in a Texas court last Friday, June 10, considers it.

Adidas accuses the swoosh brand of having violated its intellectual property through apps such as Run Club, Training Club or SNKRS. Likewise, he assures that the Adidas_1 shoe from 2005 has also been affected as it is ‘the world’s first intelligent running shoe’.

Adidas demands an economic consideration that supposes “a sufficient amount” to compensate him for the infringement of the patents in litigation by the defendant, “but not less than a reasonable fee, together with interest and costs.”

It should be remembered that a year ago it was Nike who sued Adidas for, according to the swoosh brand, having infringed its patented ‘Flyknit’ technology with ‘Primeknit’.

So far, no one from Nike’s parent company has commented on the lawsuit filed against it by Adidas.

Trump designed the electoral fraud plot months before the elections

Mon Jun 13 , 2022
Thousands of people broke through security barriers to gain access to the Capitol building in Washington. /REUTERS The commission that studies the assault on the Capitol reveals that the former president prepared a plan B when he learned that the polls foreshadowed his defeat against Biden The second public hearing […] 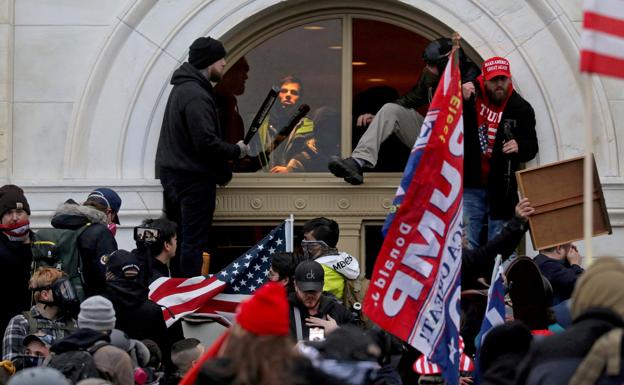